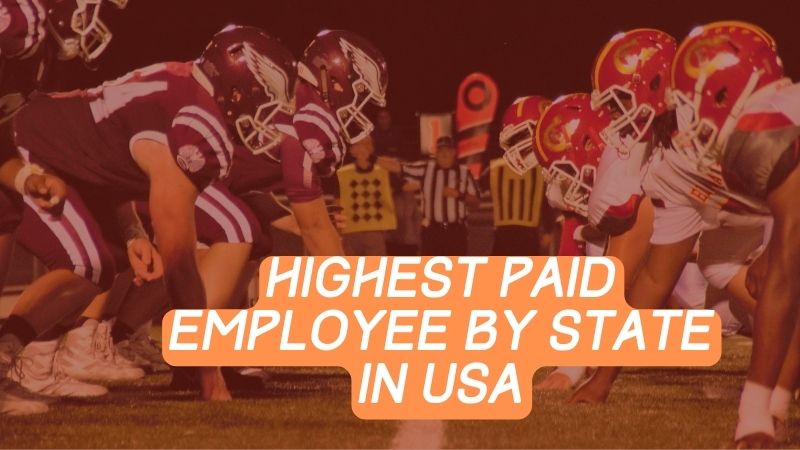 Highest Paid Employee by State: A state employee has employment from the state administration to work in any particular field. They are also called a state employee or a state officer.

Although many professionals are highly paid in most states, they are Football or Basketball Coaches or college deans. Their monthly salary might be far more than other professionals.

You might be surprised to know that the highest-paid job in the U.S. is not any governor or any judge but the college coach with the most money. If we look at the list of highest-paid government officials, then a Football coach tops the chart, followed by a Basketball coach.

In some cases, medical professionals and university administrators get paid way better.

Is it worth becoming a public employee in the USA?

Yes, it is worth becoming a public employee in the USA, which is not just attractive because of its pay base, but the benefits you get make it worthwhile.

A state employee in the U.S. works not just to make a good living but to make a difference around them and affect society with his work. Continuous promotions make the ladder of success faster.

Some of the changes that you can bring as a government employee are eliminating poverty, making the best medical treatment available, making people aware of the power of their tax and vote, and bringing the government policies to the people.

If you talk about salaries that U.S. government employees get paid, then I would say that it competes with the salary paid by private and nonprofit organizations.

When you have better work experience and a strong academic record, you can claim for better salary package, and you get it.

There are many benefits that a public employee gets in the U.S. Federal benefits include retirement, health insurance, and vacation, which is far better than what you get in other sectors.

3)   Jobs that suit your interest

As a government employee, your job will never be monotonous because that will pose a challenge before you every morning when you reach the workplace.

Your job will always be that helps you make a change in society and for the betterment of the people around you. Although no work is inferior, your work will always make a difference in society compared to people’s work in other sectors.

Some tasks that impact society are as follows:

Many people cannot balance their work and life, and because of that, they are suffering a huge loss in life and experiencing stress at work.

If you want to keep a good balance between your work and life, you must choose a government job because of its work schedule and regular leaves that you get every month, making your life easier outside work.

Being a government employee in the U.S., you get an opportunity for excellent training that upskill you for your job.

Apart from this, you will get opportunities for short-term and long-term career goals and your development plans through Agencies that will help you find the best out of yourself to ask for more in life.

There are some reasons why a U.S. employee gets paid better than government employees in other countries, including:

Demand and Supply and Cost of Living

Demand and supply are easy concepts of economics. Let’s take an example, the U.S. employees say that when there are more work opportunities from well-known companies like Apple, Google, Amazon, Microsoft, etc. and skilled employees are very short then the employees get a job in any sector, and get better salaries compared to the people in other countries where supply is higher, and demand is lower.

How much do average Americans make?

There is a huge income disparity among U.S. employees. The average salary that an American earns is $5,555 per month.

Who is the Highest Paid Government in the U.S.?

When we talk about the highest salary that an American earns, Dr. Antony Fauci comes on top of a crowd of 4 million government employees.

Dr. Antony is one of the famous disease experts in the U.S. who generally makes more than $400,000, which is even more than the salary of an American President.

Here we will list out some of the highest-paid employees in the USA.

Dabo Swinney is one of the highest-paid state employees in the USA and works as the head football coach at Clemson University in South Carolina.

After becoming the head coach of Clemson Tigers in 2008, he never looked back and kept on climbing the ladder of success.

Wondering about the salary that goes in his pocket? He deserves it as he is the only coach who took the Tigers to two national championships, including a 15-0 history win in 2018, and made a record that nobody could break.

John Calipari shares the same place as Dabo Swinney, the coach of the Clemson Tigers’. They both hold the first position in the list of the highest-paid state employees in the U.S., and John Calipari leads the post of the head coach of the Men’s football team for the University of Kentucky.

Calipari is tagged as one of the best-compensated basketball coaches who has taken his team Kentucky Wildcats to new heights, and he signed a contract last year for $86 million for 10 years.

He has achieved new heights in his career and recorded 733 official wins, making him the highest-paid state employee in the U.S.

Nick Saban is originally from West Virginia but became a well-figure in Alabama and is now the highest-paid state employee in the U.S.

He is the hugest coach of the University of Alabama (Crimson Tide) and has signed a new agreement in 2018 for 8 years of $74 million.

Previously. he was a head coach of the Miami Dolphins and won six national titles for his team.

He has been recognized by CBS as the best college coach.

Jim Harbaugh did his schooling at the University of Michigan and even played for them once.

He holds the coach’s position of that team, and he earns his income in millions per annum, which makes him the highest-paid state employee in the U.S.

He gets a basic salary of $500,000 apart from a supplement income of $7 million. Over and above his total salary, he gets access to two luxury vehicles and a country club membership.

He has been recorded in the school for the highest salary.

He is an alma mater at the University of Georgia and studied there in the 90s.

He had led the team for seven years and has been one of the prominent coaches his their football team since 2015.

He showed his leadership skills as he took the Bulldogs to the Rose Bowls and an SEC Championship victory.

Highest Paid Employees in each state in United States.

We will bring to you the most highly paid federal employees of each state of the United States, their work and employer, as well as the highest salary they’ve received to date.

6. Lovie Smith, Illinois- $5,000,000 (Working as a Head football coach at the University of Illinois at Urbana-Champaign

9. James Roland Johnsen, Alaska- $384,599 ( Working as a President at the University of Alaska Statewide System)

In this article, we have figured out the top-paid U.S. state employees and the top professions that earn the highest salaries in the U.S. It inspires when you go through the factors for why you should choose state employee jobs. There is no comparison between government and private jobs. Where you earn money in a private job, you earn respect and have the power to bring changes in society.

I think this article will help you choose the best profession for you and bring some changes that you feel will change the world.

FAQs on Highest Paid Employee by State in the USA

The states that are part of the United States have the lowest minimum wage?

Two states with the lowest minimum wages across the United States are Georgia ($5.15) and Wyoming($5.15). However, companies in Georgia and Wyoming that are under the Fair Labor Standards Act are legally required to pay a $7.25 Federal minimum wage.

A US worker typically earns around $94,700 per year. The minimum median salary that an American is entitled to is $24,000. The most expensive average is $423,000. However, the actual maximum wage is significantly more. The pay of the highest-paying state-owned company includes transportation, housing as well as other benefits.

Which is the most difficult task to get in America?

As per the Bureau of Labor Statistics (BLS) the most challenging work to get into in America involves line installation and repairs. For workers in these positions, the likelihood of death or sustaining injuries is greater than the norm due to the constant exposure to potentially dangerous dangers.